Louisiana and the rest of the Southern United States is home to many alligators. These wild animals are an important part of our ecosystem, and that is one of the many reasons why they are protected under federal and state law. However, many Americans hold misconceptions about these great creatures, believing they’re aggressive, poor climbers, and more. Here we uncover the truth about gators and bust some of the most common misconceptions. 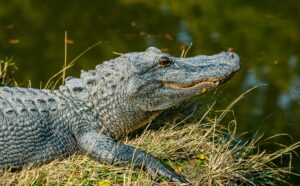 Perhaps the most popular misconception (and the most harmful) is that alligators are aggressive towards humans. In reality, you have more to fear from snakes or spiders than you do from gators. Alligators are typically scared of humans, and when they see one, they’re more likely to walk, run or swim away than attack. Gators, like most wild animals, will only attack if they’re provoked. That’s why it’s a good idea to keep your distance if you see a gator in the wild.

Another misconception is that alligators have bad eyesight due to their head shape and eye positioning. However, this is far from the truth. Alligators’ eyes are positioned on the sides of their heads, but they can see straight forward, thus giving them a wider view than humans. They can even recess their eye into their head, preventing another alligator from penetrating the eye with their tooth while fighting. They are also nocturnal animals, meaning they have much better night vision than most other animals.

An alligator can’t climb around like a monkey, but that doesn’t mean they’re poor climbers. Alligators are strong and muscular, making them agile climbers. They can climb up a chain link fence using their claws, especially if such an enclosure’s corners are at a 90-degree angle. This is why many alligator farmers and ranchers use 45-degree corners in their enclosures.

Myth #4: Alligators are the same as crocodiles

A mama alligator will not eat her own babies, but Daddy, who has nothing to do with the rearing of his babies, doesn’t recognize them as babies and will eat them. Mama will care for her young for up to two years, but when she is ready to have a new clutch of babies, she will chase her yearlings off and if they elect to not listen to their Mom and leave, she will eat them.